Melissa Pemberton is a resident of Huntington, West Virginia. She has a successful career, recently bought her first home and is passionate about helping others by sharing her powerful journey. But Melissa’s life did not always look the way it does today.

At the age of 19, Melissa’s life changed when she was involved in a tragic car accident and was prescribed pain medication and other mood-altering, addictive medication. The opiates offered a temporary and dangerous numbing effect on the pain and grief experienced from her grandpa’s tragic death. Melissa went on to battle a substance use disorder for several years and is also a domestic abuse victim.

Melissa has since broken free of an abusive situation and has been clean from opiates for eight years. She is a spokesperson for West Virginia Game Changer and desires to share her story of hope with others and educate people on the dangers of substance use. Continue reading to learn more about Melissa’s story. 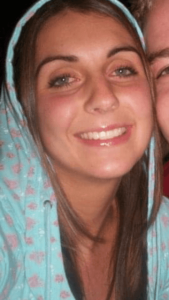 Melissa grew up with her father, mother, two sisters and brother in a Christian, loving and substance-free home. Melissa was an athlete, involved in her church and excelled in her coursework at school. At the age of 19, she began attending Marshall University in Huntington, West Virginia, as a Promise Scholar.

However, that same year, Melissa’s life suddenly changed when she and her grandfather were involved in a car accident, and he passed away. She had always been close with her grandfather, and his unexpected passing left a void in her life. Melissa was prescribed over 25 different pain medications from the car accident for about seven years. She said the car accident is what caused her to begin using substances.

“Having a doctor prescribe me that amount of medication was the first thing that started my addiction. Once I put the opiates in my body, I fell in love. I loved the way it made me feel. I loved how it made me feel like I was on top of the world. It was love at first sight,” shared Melissa.

Melissa said that the prescribed opiates helped suppress the emotional pain she felt from losing her grandfather. She believed the drugs would make her unstoppable. Although she thought she was still “functioning” because she kept her scholarship, taught school and coached a volleyball team every day, Melissa’s addiction grew. This dangerous cycle only caused her situation to get worse.

“The doctor just kept prescribing and prescribing and upping my dose. It got to the point where I was addicted, but I was telling my family, ‘Well, the doctor’s giving this to me, so it’s okay.’ I continued to lead a double life. But the doctor was not telling me to snort my medication or telling me to sell my medication to get stronger stuff on the street. Addiction is a real thing,” Melissa said. She is very satisfied knowing her doctor is now in prison and cannot ruin another person’s life. 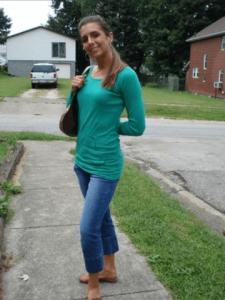 The effects of substance use were far worse than Melissa could have imagined. She lost her teaching career. She overdosed four different times in front of her family, with Narcan saving her life each time. She developed a strained relationship with her parents. She moved to Chicago to live with her aunt and uncle because she felt that Huntington, WV, was the problem, but then she started using heroin. Once her aunt and uncle found out that she had fallen back into addiction, they told her that she would need to leave their home. Melissa accredits the tough love she received for saving her life, and it made her realize that she was the problem instead of blaming everyone else.

“That was when I hit rock bottom, and I decided that I needed to get help,” said Melissa.

At that time, finding help for a substance use disorder was difficult in West Virginia. No one in the area wanted to take Melissa because they thought she would be a medical risk. She ended up contacting a rehab treatment center in California, and they had her on a plane the next day.

After staying in rehab for 45 days, Melissa did not feel that she was ready to go home to West Virginia. She had built her support system in California, so she decided to stay at a sober living home in the area.

Once she felt comfortable leaving, she moved in with and started dating a man she had met while in recovery. At first, their relationship seemed great. He would bring her flowers and make her dinner — but he relapsed, and so did Melissa. She soon realized his actual behavior was controlling and abusive.

“I started seeing that he was keeping me away from my family. He ended up burning my apartment down with my dogs in it. There were times he would beat me so bad that there was just blood everywhere. Then he would put me in the shower and tell me that he didn’t mean to do that — he just lost his temper. It got to the point where he started to find out my family’s Social Security numbers and found out where they worked. That was a scary time in my life,” Melissa shared.

A STORY OF HOPE 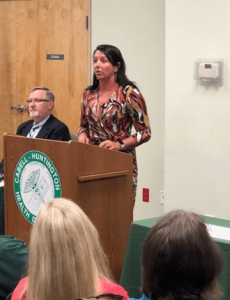 Melissa is no longer a victim of domestic abuse or addicted to opiates. She returned home to safety with her family in West Virginia and has been clean of opiates for eight years. She credits God and her faith as what got her through those dark and challenging times in her life.

“I could have a terrible day, but no matter what, I do not have to use pills ever again. I have a choice today to continue, and I have a choice now to give hope to others,” Melissa said.

Melissa vulnerably shares her story of hope and recovery with others. She desires to make a difference and educate West Virginia’s youth on the dangers of substance use.

“If you live in West Virginia, and you want to make a difference, it is about helping our younger generation and providing education so they won’t make the same mistakes. It just takes stories all around West Virginia to get to where we need to be. I wish when I was nineteen that I had more hope stories and was aware of the risk of taking addictive medication,” shared Melissa.

Substance use is a grave concern in West Virginia. With the rise of street fentanyl, a synthetic opioid that is 50 times more powerful than heroin, the possibility of overdose is more dangerous than ever before. Melissa encourages young people to steer clear of drugs and other harmful substances. 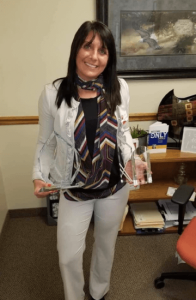 “The thing about drugs is it does not discriminate. It could take anybody. It does not matter if you come from a good life, a bad life, or whatever walk of life you come from; you never know when you put that substance in your body how you are going to react to it,” Melissa stated.

West Virginia Game Changer is an initiative endorsed by Governor Jim Justice designed to educate, support and empower our youth to make healthy choices as they prepare to be our leaders of tomorrow.

Melissa’s life today looks vastly different than it did several years ago. She is happy, has a successful career and recently bought her first home. Her story is an inspiration to those struggling with substance use disorders and those who are in domestic violence situations.

“My advice to others, to women and men, is you are worth it. You were put on this earth as a purpose. You are beautiful,” Melissa shared.

ARE YOU READY TO CHANGE THE GAME? BECOME A WEST VIRGINIA GAME CHANGER TODAY

West Virginia Game Changer is an initiative endorsed by Governor Jim Justice designed to educate, support and empower our youth to make healthy choices as they prepare to be our leaders of tomorrow. Our goal is to encourage our youth to lead by example through healthy lifestyles, improve the future and make a difference in the state of West Virginia. While we are focused on the opioid epidemic, West Virginia Game Changer positively impacts much more.

Your cart is currently empty!